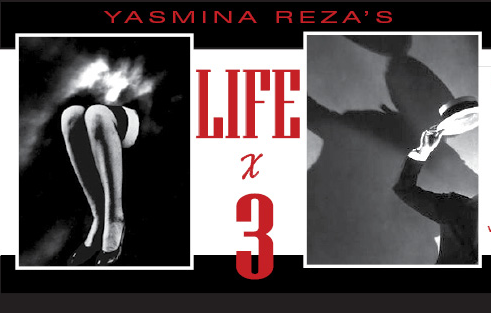 Cesear’s Forum will present Yasmina Reza’s LIFE x 3 in a limited September/October engagement at Kennedy’s Down Under, Playhouse Square.
The play, a 90 minute evening, is best described as a theatrical triptych, offering three variations on the same event; a dinner party gone awry. With comic acuity, the characters’ attitude, actions and responses have unforeseen consequences. The repetitions suggest a “what if…” scenario.
Yasmina Reza is a French playwright, novelist and screenwriter best known for her plays ART and GOD OF CARNAGE. She has achieved critical and popular international success.
The Cesear’s Forum 90 minute production will follow the playwright’s intended use of a minimalist setting by Michael Larochelle that allows the audience to focus on and identify with the character driven narratives. With lighting by Andrew Kaletta , costumes by Aimee Kluiber, the production will be staged by Artistic Director Greg Cesear. The cast includes: Tricia Bestic, Brian Bowers, Dana Hart and Julia Kolibab. The production is sponsored, in part, by Cuyahoga Arts and Culture.
Yasmina Reza’s LIFE x 3 (translated by Christopher Hampton): September 22nd through October 28th, Friday and Saturday at 8pm. Two Sunday Matinees at 3 pm on October 8th and 15th, Kennedy’s Down Under, Playhouse Square, 1501 Euclid Avenue, Cleveland, Ohio.
Call 216-241-6000 or visit www.playhousesquare.org. Ticket price is: $18
Sponsored in part by

Kennedy’s Down Under in Playhouse Square
1501 Euclid Avenue in Cleveland
216-241-6000 or www.playhousesquare.org