THE YEAR OF MAGICAL THINKING by Joan Didion; an adaptation of the award-winning, bestselling memoir, Joan Didion transforms the story of the loss of her husband and their daughter into a powerful one-woman play about coping, which is distinctly resonant during this time.

TAKE 5, by Lanford Wilson; five one-act plays: WANDERING, SEXTET (YES), A BETROTHAL, BRONTOSAURUS and A POSTER OF THE COSMOS

THE INVESTIGATION, documentary drama concerning the Frankfurt Auschwitz Trials of 1963-1965 by Peter Weiss

OCCUPANT, by Edward Albee; a tribute to Louise Nevelson, the play examines self-determination, perseverance and accomplishment

ELEGY FOR A LADY, by Arthur Miller and THREE WOMEN, by Sylvia Plath, two one-act plays dramatize the psychological struggle within individual consciousness

ALL THAT FALL, minimal Irish storytelling within the setting of a radio studio environment, by Samuel Beckett

CHRISTOPHER COLUMBUS or (Did You Say Sphere?), a satirical “vaudevillian” farce, by Michel de Ghelderode, translated by George Hauger 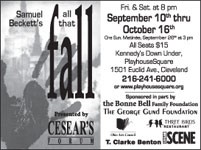 THE UNEXPECTED MAN, interior monologues reveal desire, self invention and the imaginings of a brief encounter, by Yasmina Reza, translated by Christopher Hampton

WHEN THE WORLD WAS GREEN (A Chef’s Fable), mythmaking and truth between a chef/murderer and a young reporter, by Sam Shepard and Joseph Chaikin

THE LARK, a sardonic tale of politics, religion and the Joan of Arc trial, by Jean Anouilh, translated by Christopher Fry, adapted by Lillian Hellman and Greg Cesear

UNDERNEATH THE LINTEL, a solo/comic detective story of self-discovery, by Glen Berger 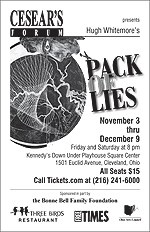 THE STRONGER & PLAYING WITH FIRE, two one-act plays of infidelity, by August Strindberg

THE CHAIRS, theatre of the absurd, by Eugene Ionesco

THE QUEEN AND THE REBELS, a political allegory, by Ugo Betti
LAUGHTER IN THE SHADOW OF THE TREES & ABRAHAM LINCOLN DIES AT VERSAILLES, two one-act plays reflect on mortality, by James Prideaux

SIX CHARACTERS IN SEARCH OF AN AUTHOR, existential drama, by Luigi Pirandello
THE HOLLOW CROWN, an allegory of the British Monarchy, devised by John Barton

THE BELLE OF AMHERST, from the life and work of Emily Dickinson, by William Luce

REQUIEM FOR A NUN, a story of debasement and divinity, by William Faulkner/Edgewater Theatre

IMPROVISATION OR THE SHEPHERD’S CHAMELEON, an absurdist lampoon, by Eugene Ionesco/Playwright’s Center